Flutter and Kafka are two popular technologies. Flutter is a framework for building multi-platform native apps, including web apps and mobile apps both for Android and iOS, from a single codebase written in the Dart language. Kafka is a distributed event streaming platform for interconnecting the backend systems of a company, typically across a data center network. Kafka is not designed to address the challenges of connecting lots of devices across the public Internet. Therefore, building a realtime web or mobile app with lots of users to communicate with Kafka over the Internet needs a complementary technology. This blog post takes a look at the technologies available to extend Kafka across the Internet, and discusses the challenges faced to scale to millions of users. Finally, we show how to build a realtime sports scores app that scales using Flutter and Kafka.

Scaling to millions of users

Prior to discussing the technologies available to extend Kafka across the Internet, let’s see what scalability really means for good architecture.

Scaling to millions of users is achievable with any technology that scales horizontally, just by deploying enough machines. Scaling horizontally is simple and necessary but not sufficient for good architecture. Scaling vertically — by handling as many users as possible on each machine — is also needed.

Operating an app with hundreds of machines using a technology which scales vertically poorly, when only a few machines and a vertically scalable technology would be needed, is bad architecture. It's simply a waste of resources in terms of maintenance, hardware failures, power consumption etc. Not to discuss the economic and environmental impact, but scaling to millions of users with an event streaming technology that scales vertically poorly is like searching for a number in an ordered list of numbers using the linear search algorithm. It is simple and feasible, especially if the list is short. After all, if the list has ten numbers, it requires only up to ten comparisons. However, when dealing with one million numbers, it would be a shame to use up to one million comparisons rather than twenty comparisons with the binary search algorithm. Using an event streaming technology which scales vertically is like searching with binary search.

A Kafka client for Dart exists from the community. It could be used to build Flutter apps to be compiled as web or mobile apps. However, as discussed above, the Kafka protocol is ideal for connecting backend systems across the data center or cloud networks. For example, with the Kafka protocol, the client should connect using TCP connections to all Kafka brokers. This is particularly inconvenient for clients connecting from edge networks or Internet as they must pass through firewalls and load balancers. Therefore, using the Kafka client library for Dart, one could possibly connect a limited number of users across the local network of a company, but not millions of users across the web.

The Kafka REST Proxy provides a RESTful interface to Kafka using the standard HTTP protocol, so the clients coming from the Internet could now pass through firewalls and load balancers. Also, REST is easy to implement in any language, including in Dart.

That said, the main issue with this approach is the clients connect using the HTTP request/response pattern, so in order build a real-time app using this approach, a polling mechanism has to be used by periodically asking the Kafka REST Proxy if any fresh data is available on the server side. This typically results in a number of issues, including:

The WebSocket protocol has been designed for realtime bidirectional communication. It uses the HTTP protocol only for the handshake between the client and the server, then upgrades to a persistent TCP connection between the client and the server. This has the advantage of the WebSocket connections using the standard HTTP ports 80/443 which are able to pass through firewalls and load balancers in the same way as the HTTP requests do. On the other hand, by upgrading to a persistent TCP connection, the WebSocket protocol creates the premises for low-latency and high scalability. However, these are not automatic. The degree in which a WebSockets gateway is scalable and achieves low latency depends entirely on the quality of its implementation.

There are WebSockets Gateways for Kafka. Dart also implements the WebSocket protocol. While using WebSockets is the right approach, using plain WebSockets to extend Kafka across the web is not sufficient:

Most of these enterprise solutions integrates with Kafka using the Kafka Connect layer. A few examples are Ably, Diffusion, MigratoryData, and Solace. While Kafka Connect is a sophisticated service of the Kafka ecosystem which makes the integration with other systems easy, it introduces an additional layer to the architecture. So, in order to build a realtime web or mobile app, three communication layers have to be deployed:

This results in an unnecessary complex architecture.

MQTT and the Feedback Implosion Problem

HiveMQ uses the MQTT protocol, a lightweight application-layer publish/subscribe messaging protocol which works over WebSockets. The MQTT protocol is standard for the IoT industry. The protocol is designed to be simple enough to accommodate the constrained IoT devices. For example, it implements guaranteed delivery using simple acknowledgements: when a message is sent by the server to the client, the client sends back an acknowledgement message to confirm its reception. This makes sense for IoT because data typically flow from lots of IoT devices to the server, and less frequently vice-versa, from the server to lots of IoT devices. However, for realtime web or mobile apps with millions of users, there are use cases where data is broadcasted from the server to lots of clients. For example, an app which displays sports scores in realtime (see the live demo below). Supposing a score update is broadcasted to one million concurrent sports fans using MQTT, this will result into one million feedback acknowledgment messages. This is known as the Feedback Implosion problem, and has an impact on vertical scalability.

MigratoryData also uses a lightweight application-layer publish/subscribe messaging protocol on top of the WebSockets protocol, but where guaranteed delivery is achieved using only negative feedback. Sequence numbers are assigned to messages on the server side and messages are replicated across the cluster. If a user receives a message with a sequence which is not in order or it receives no data, including no heartbeat for a while (failure detection mechanism), only in this rare situation would a client send negative feedback. It reconnects automatically to the cluster of WebSockets gateways and provides the last correct sequence number it received to get the new messages from that sequence number. In this way, MigratoryData achieves both reliable messaging and vertical scalability to address use cases with millions of users. Check out the following paper Reliable Messaging to Millions of Users with MigratoryData for more details.

The MigratoryData client library for Dart is available as a package on pub.dev, the official package repository for Dart and Flutter apps. We’ve built a live demo app which produces and consumes sports scores into and from Kafka through the MigratoryData WebSockets gateway, and displays the live scores into a scalable realtime web app as follows:

This is how realtime data travels across this demo: 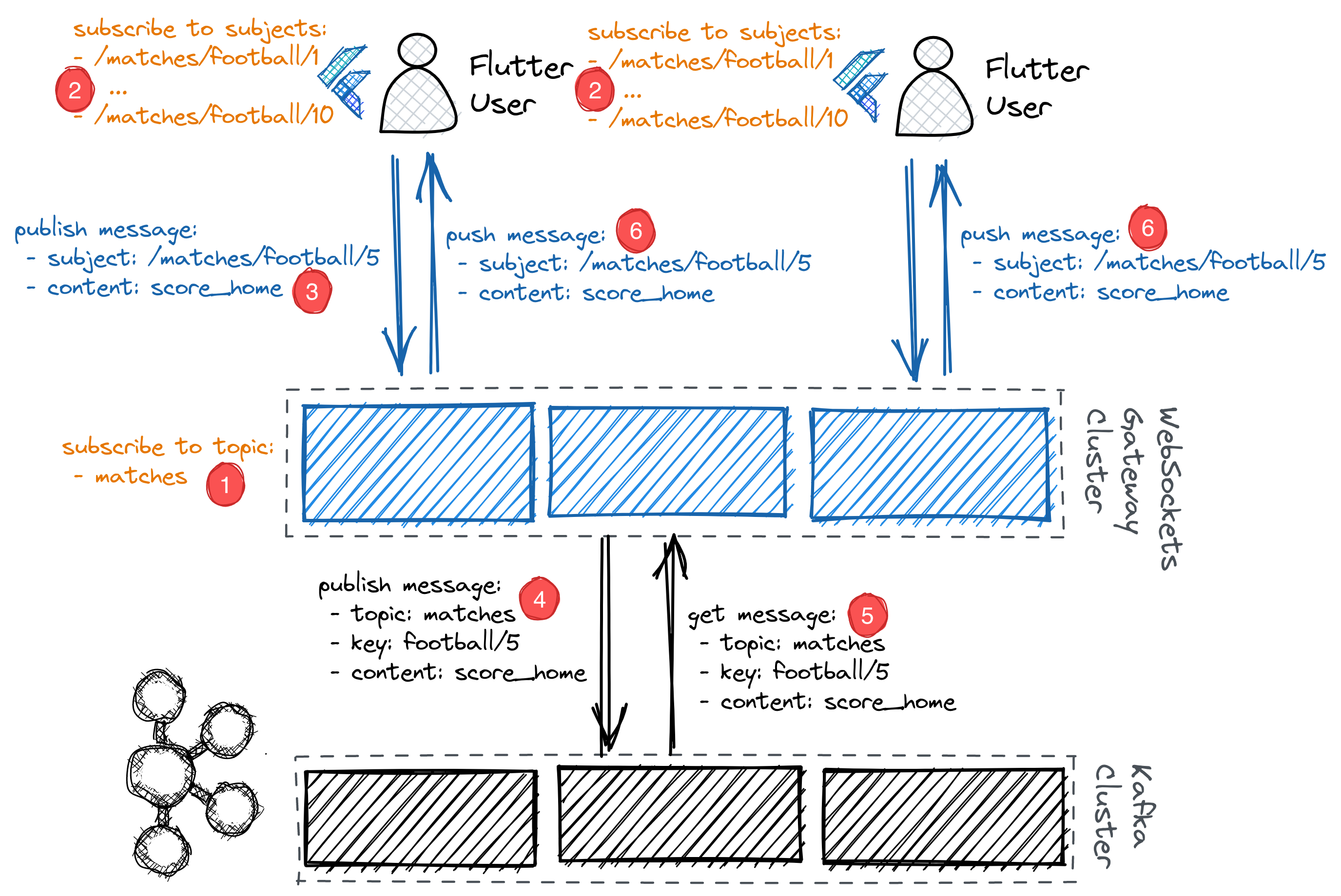 For didactic reasons, we’ve first written the live demo above as a web-only app written in Dart. The source code of the web-only app is available on github here. We’ve also written the live demo as a multi-platform app written in Dart and using the Flutter UI, such that you can compile it as a web app, Android app, iOS app, or a desktop app for MacOS, Linux, or Windows. The source code of the multi-platform app is available on github here.

In this blog post we’ve discussed the challenges faced when extending Kafka to millions of users over Internet by presenting the existing technologies and discussing their limitations: the Kafka client library and the limitations of the Kafka protocol, the REST Proxy and the request/response polling limitation, the WebSockets gateway and the need for enterprise features, the enterprise web messaging solutions and the need for an additional Kafka Connect layer. We concluded with the Kafka-native enterprise web messaging solutions which are best suitable for extending Kafka to millions of users over the Internet. Here we’ve found solutions based on the MQTT protocol, which is appropriate for IoT, but less appropriate for web and mobile due to the Feedback Implosion problem. Finally, we saw that MigratoryData, a Kafka-native enterprise web messaging solution, implements a Feedback Implosion Suppression algorithm which allows reliable messaging at scale.

If you have a realtime app with lots of users that needs higher scalability and lower latency than your current solution can deliver, or if you want an advantage over your competitors, contact us.