In this article we provide a step-by-step guide to getting started with MigratoryData and its Kafka Native Add-on, an ultra-scalable Websocket publish/subscribe broker which integrates natively with Apache Kafka. Thanks to its huge vertical scalability (1000x more scalable than the C10K problem) and linear horizontal scalability both for publishers and subscribers, MigratoryData can enable bidirectional messaging communication between Apache Kafka and millions of Web and Mobile users or IoT devices - and do so cost-effectively.

We’ve already explained why MigratoryData is a perfect fit for extending Apache Kafka to the Internet, reliably and at scale, as well as the compatibility and complementarity between the two messaging systems.

It is sufficient to say here that both systems MigratoryData and Kafka are publish/subscribe messaging systems, both using a similar notion - named topic in Kafka and subject in MigratoryData - to connect subscribers and publishers. Both Kafka topics and MigratoryData subjects are strings of characters with the following restrictions:

For example, the following MigratoryData subject /vehicles/car1/speed corresponds to the Kafka topic vehicles and the Kafka key car1/speed as illustrated here: 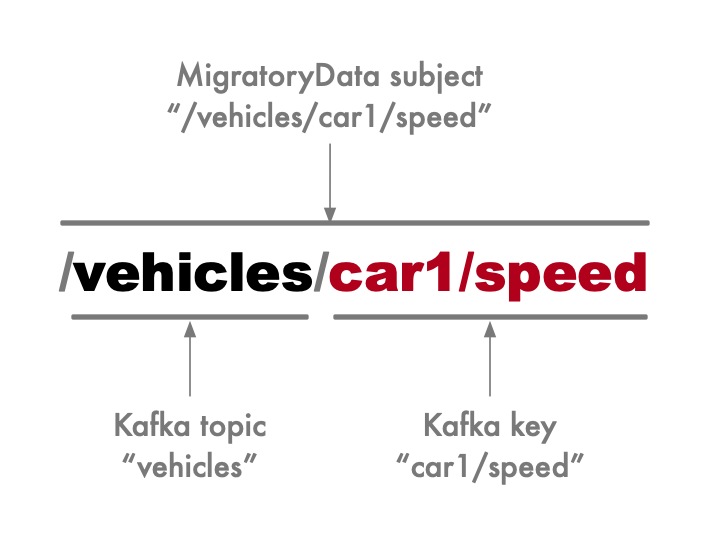 Because in Kafka it is possible to publish a message on a topic, say vehicles, without using a key, i.e. using a null key, then the Kafka topic vehicles corresponds to the MigratoryData subject /vehicles, consisting only of the first segment without using any subsequent segments: 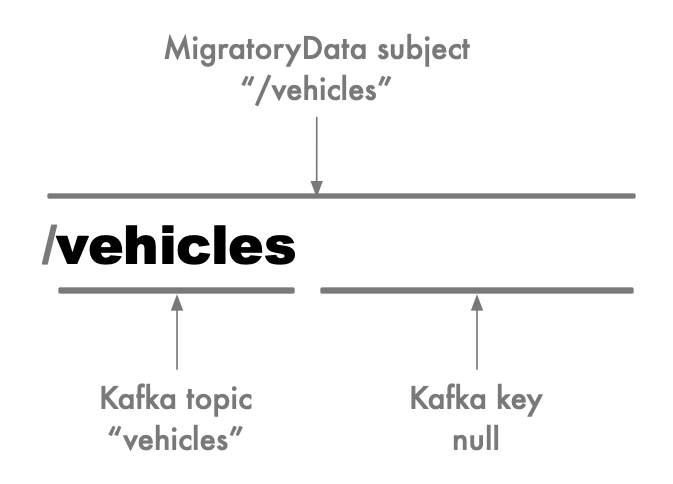 MigratoryData comes with installers for Linux and instructions on how to deploy in production MigratoryData clusters either on premises or in the cloud, using Docker and Kubernetes. Also, a platform-independent tarball useful for development and testing on platforms like Linux, Windows, MacOS is available.

Apache Kafka is available from production-ready cloud services like Confluent or Azure Event Hubs. Also, a platform-independent tarball useful for development and testing on platforms like Linux, Windows, MacOS is available.

The only requirement both for MigratoryData and Apache Kafka is to have installed Java Runtime Environment (JRE) version 8.

Make sure that you have Java version 8 installed. Download the platform-independent tarball package of Apache Kafka and unzip it to any folder, change to that folder, and run the following two commands in two different terminals on Linux or MacOS (run the similar commands with the bat extension instead of the sh extension on Windows):

This will deploy a cluster of one instance of Apache Kafka which will listen for Kafka producers and consumers on localhost, on the default port 9092.

Make sure that you have Java version 8 installed. Download the platform-independent tarball package of MigratoryData and unzip it to any folder, change to that folder and edit the main configuration file migratorydata.conf by adding the following line:

Then, run the following command on Linux or MacOS (run the similar command with the bat extension instead of the sh extension on Windows):

This will deploy a cluster of one instance of MigratoryData which will listen for client connections on localhost, on the default port 8800.

The default configuration of MigratoryData contains a group of Kafka consumers with a single consumer connecting to the Kafka cluster deployed at the address localhost:9092, and subscribing to the Kafka topic vehicles as you can find in the configuration file integrations/kafka/consumer.properties:

Also, the default configuration of MigratoryData contains a group of Kafka producers with a single producer connecting to the Kafka cluster deployed at the address localhost:9092, as you can find in the configuration file integrations/kafka/producer.properties:

Note the asymmetry between the default configuration files of the Kafka producer and Kafka consumer implemented into MigratoryData.

On one hand, the Kafka consumer includes a supplementary parameter topics, meaning that an Internet client of MigratoryData will be able to subscribe only to the subjects having as the first segment, the Kafka topic vehicles, e.g. /vehicles/car11/temperature, /vehicles/car1/speed, etc - provided however that the Internet client is entitled by your authorization rules to subscribe to those subjects. Multiple Kafka topics can be configured with the parameter topics as a comma-separated list.

If a browser is not available on the machine where you installed MigratoryData and Kafka, then, supposing the address of the machine is push.example.com and the port 8800 is not blocked by the firewall, you can remotely test the installation by opening the following URL from a remote machine: http://push.example.com:8800

This will open the welcome page of MigratoryData which contains certain docs and demos. Click on the DEMO button of the welcome page. You should see a web page like the following one: 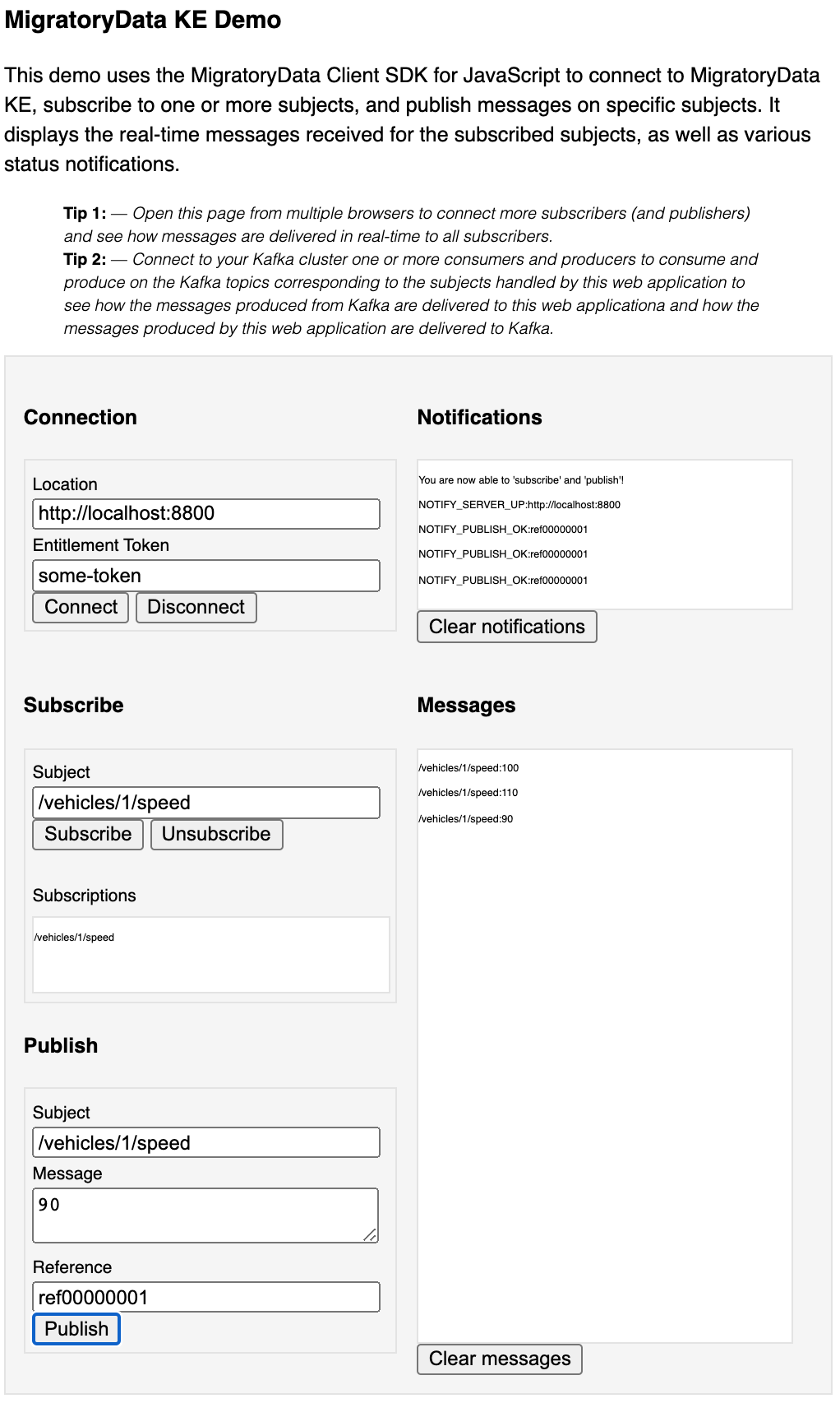 Supposing you installed MigratoryData and Kafka on your machine, click on the Connect button to connect the demo application to your deployment. Otherwise, if you installed MigratoryData and Kafka on a remote machine, say http://push.example.com:8800, change the Location in the demo app to http://push.example.com:8800 before clicking on the Connect button.

Finally, publish some messages on the subject /vehicles/1/speed by clicking on the Publish button. You should see how these messages are received in real-time. Also, you can open the demo app in another browser to see that, in fact, the messages are delivered from the backend to all subscribers of that subject.

Also, you can produce messages to Kafka on the topic vehicles with the key 1/speed and see them arriving to your web application automatically and in realtime as follows: