This benchmark shows that MigratoryData achieves 8X higher scalability than the record obtained by the competition in the same benchmark category; reaffirming it is the most scalable WebSocket server. This benchmark result also demonstrates that, using MigratoryData WebSocket Server, it is feasible and affordable to build real-time web applications delivering high volumes of real-time information to a high number of concurrent users.

In this benchmark scenario, MigratoryData scales up to 192,000 concurrent users (delivering 8.8 Gbps throughput) from a single Dell R610 1U server and achieves an 8X higher scalability than the record obtained by the competition (who used a more recent Dell 1U server with similar specifications). Moreover, MigratoryData achieves lower bandwidth utilization and lower latency as shown in the diagram and table below. 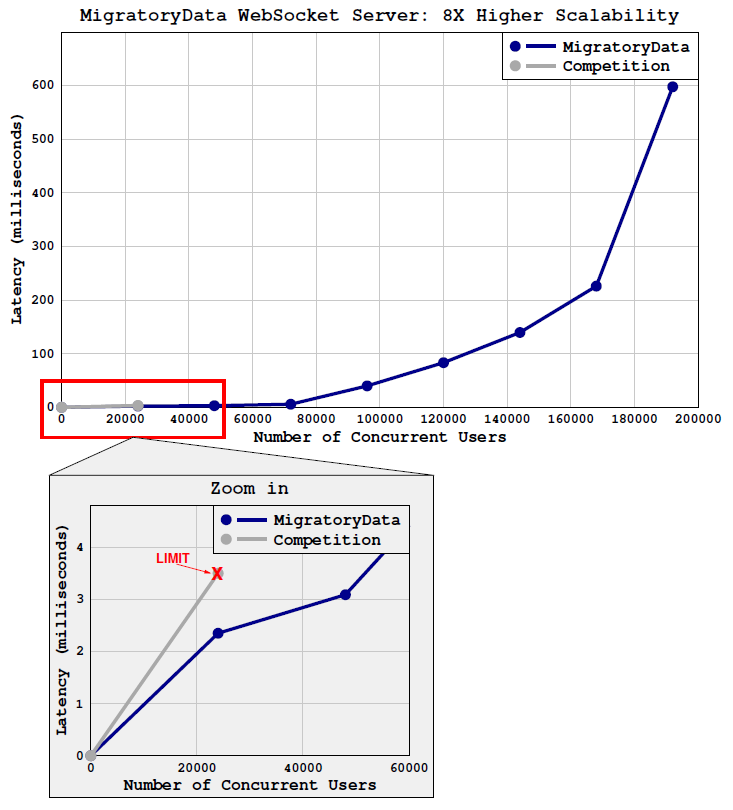 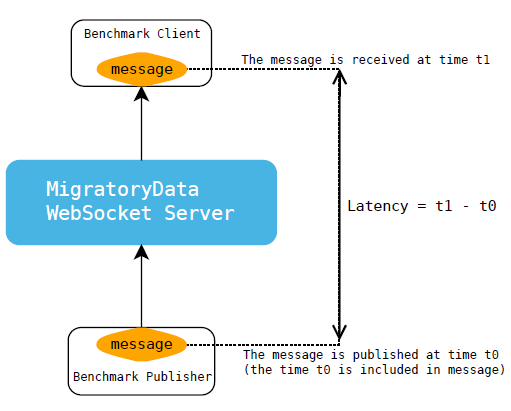 In the table below, it is important to note that we’ve obtained the results using the default configuration of MigratoryData WebSocket Server, a fresh installation of Linux Centos 6.4 (without any kernel recompilation or other special tuning), and the standard network configuration (employing the default MTU 1500, default kernel buffer sizes, etc).

As RAM is inexpensive, we did not tune the memory configuration and used a reasonable value for each benchmark test. 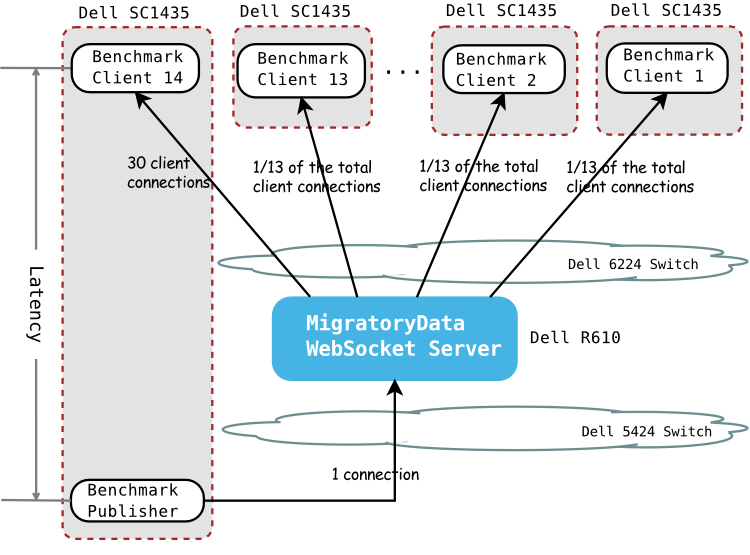 For example, in our benchmark test which simulated 192,000 concurrent users, we deployed 13 instances of Benchmark Client, each opening 14,770 (i.e. 192,000 / 13) concurrent client connections to the MigratoryData server.

Moreover, the sample size for each test is 180,000 messages (600 second x 10 messages per second x 30 concurrent client connections). Thus, it is large enough such that the latency results are statistically accurate.

Not only does MigratoryData WebSocket Server offer horizontal scalability via its built-in clustering feature, it also offers linear horizontal scalability because each instance of MigratoryData WebSocket Server in the cluster runs independently from the other cluster members. It exchanges only negligible coordination information or, depending on the clustering type you configure, does not exchange any information at all with the other cluster members.

The implication of this is that, for the example above, in a production deployment, it is recommended to have at least 7-8 servers to achieve 1 million concurrent users such that, if a failure were to occur, each server will have enough reserve to accept part of the users of the cluster member which fails.