The C10M problem relates to the classic C10K Internet scalability problem, which originally occurred in the context of Web servers. The C10K problem consists of successfully supporting 10,000 concurrent connections on a single machine. While the C10K problem is currently solved by certain Web servers, the C10M problem, which consists in supporting 10 million concurrent connections on a single machine, remains a challenging problem not only for Web servers, but for any Internet server in general.

In addition to its role as real-time Web server, MigratoryData Server implements features traditionally provided by Enterprise Messaging Systems such as publish/subscribe interaction, active/active clustering, guaranteed message delivery, entitlement, as well as API libraries for the most popular environments.

In this article, we demonstrate that MigratoryData Server is able to handle 10 million concurrent connections on a single commodity machine. Moreover, it is able to push almost 1 Gbps live data to these 10 million users (each user receiving a 512-byte message per minute) with an average latency of under 100 milliseconds.

We used several publishing clients to push messages into a MigratoryData server, which pushed the messages out to several subscribing clients through HTTP persistent connections.

The following diagram shows the architecture of the benchmark test. 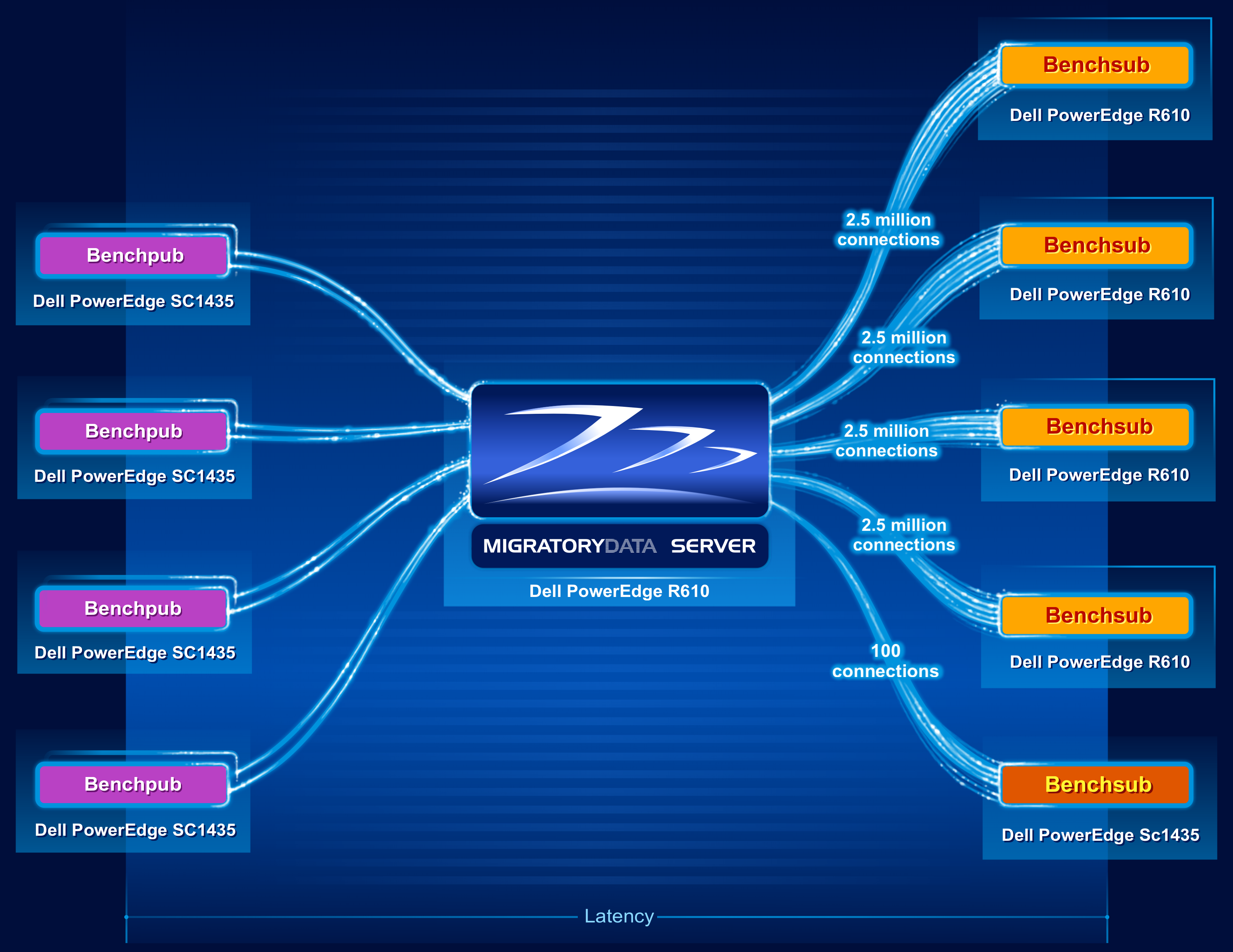 Nine machines were utilized in the benchmark test, as follows:

Latency, depicted in the diagram above, is defined from the time Benchpub creates a message until the Bechsub receives the message from the MigratoryData server.

MigratoryData Server provides advanced monitoring via JMX and other protocols. We used the jconsole tool (included in the Java Development Kit) to monitor the MigratoryData server via JMX. In the results presented below we show screenshots obtained during JMX monitoring.

As can be seen from the JMX screenshot below, MigratoryData Server handled 10,000,108 concurrent connections (see the JMX indicator ConnectedSessions). The same number of concurrent socket connections is confirmed by the tools netstat and slabtop (see the screenshot in the Network Utilization subsection below). 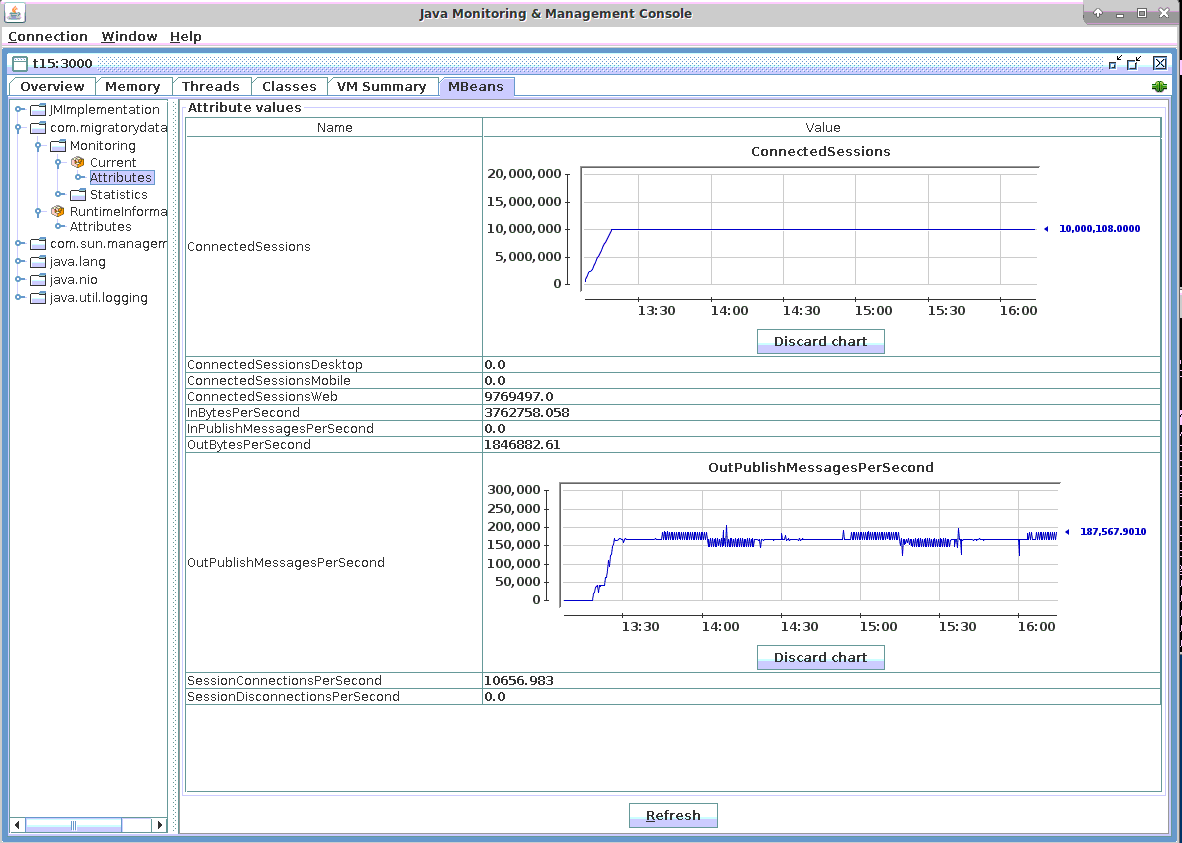 As described in the Benchmark Setup section, eight Benchpub instances ran on four machines and sent messages to the MigratoryData server.

In order for each of the 10 million users to receive one message per minute, each of the eight Benchpub instances published 21,000 messages per second. The payload of each message consisted of a sequence of 512 random bytes. Therefore, the eight Benchpub instances sent 168,000 messages/second (i.e. 10,080,000 messages/minute) to the MigratoryData server which were then pushed out to the subscribing clients at the same message frequency.

The screenshot of the Connections subsection above shows that the outgoing messages throughput is around 168,000 messages per second (i.e. 10,080,000 messages/minute) (see the JMX indicator OutPublishMessagesPerSecond).

In the screenshot below, it can be seen that the CPU usage of the machine which hosted the MigratoryData server was under 50%, with spikes from time to time when a major JVM Garbage Collection occurred. In fact, from our observations, the CPU percent strictly utilized by the MigratoryData server is under 40%. The variations you can see in the screenshot from under 40% to about 50% occur when minor JVM Garbage Collections happen. 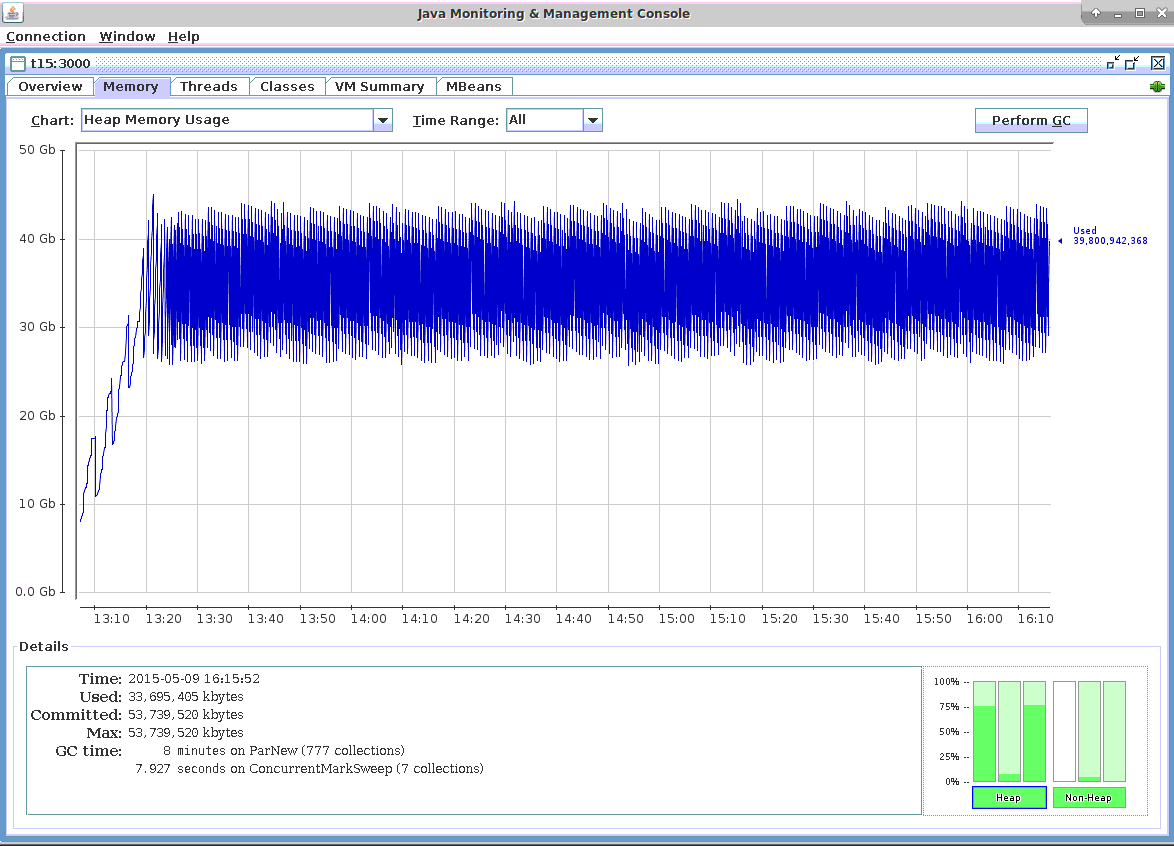 As you can see in the screenshot below, the outgoing traffic for pushing 168,000 messages/second (i.e. 10,080,000 messages/minute) to 10 million concurrent clients was 103 Megabytes per second, representing 0.8 Gbps.

The payload of each message is 512 bytes and the throughput is 168,000 messages/second (i.e. 10,080,000 messages/minute), totaling 82 Megabytes per second. The difference of 21 MB/sec, up to the actual bandwidth utilization of 103 MB/sec, was introduced by the overhead added by the MigratoryData protocol as well as by the TCP/IP protocol, resulting in an extra 131 bytes per message.

In fact, the overhead introduced by the MigratoryData protocol and the TCP/IP protocol is even less than 131 bytes per message. When we calculated the bandwidth – using the accurate traffic reported by the kernel into /proc/net/dev – we included all outgoing traffic of the network interface. This traffic is almost entirely produced by messages being pushed to clients. However it also includes some additional traffic produced by several ssh sessions, the JMX monitoring console, as well as the acknowledgements sent to publishers for receiving the messages.

As defined in the Benchmark Setup section, latency is the time needed for a message to propagate from the publisher to the subscriber, via the MigratoryData server. When Benchpub creates a message it includes the creation time as part of it. In this way, Benchsub can compute the latency as the difference between the creation and reception times of the messages.

In the screenshot below, the “Total messages” information shows that each of the four Benchsub instances received around 400 millions messages during the 3 hours of benchmark test running. Therefore, the following latency statistics are very accurate, being computed on the entire population of more than 1.5 billion messages: 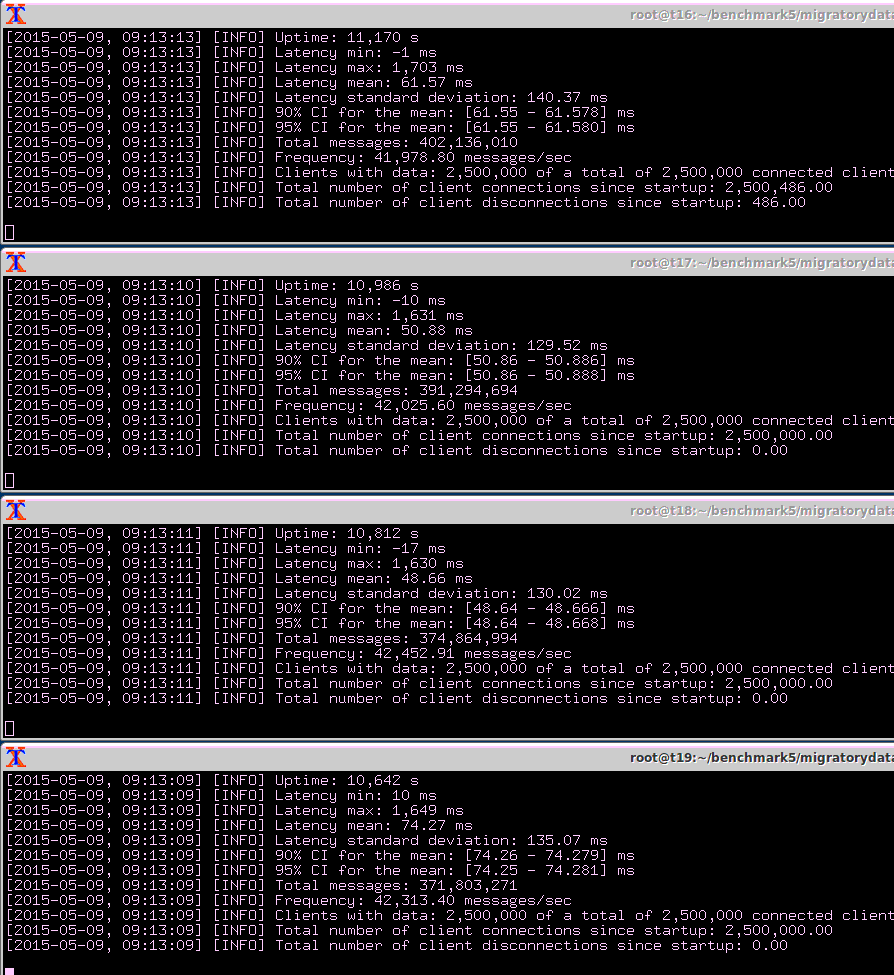 In the previous section we explained that the latency statistics – mean, standard deviation, and maximum – were computed for all messages received by all 10 million clients. However, other stats that would be interesting to look at for a real-time service, including the median, 95th percentile and 99th percentile, cannot be computed incrementally. We need all latencies in order to be able to compute such extra statistics. Recording 1.5 billion latencies is not practical during a performance test, so we used sampling to estimate these additional statistics.

As outlined in the Benchmark Setup section, we used a fifth Benchsub instance to collect samples for 100 concurrent users from the entire population of 10 million. Each of the 100 users subscribed to a randomly selected subject from the 10 million available.

We recorded all latencies for each of the 100 users for 166 minutes during the benchmark test. Since each user received an average of one message per minute, we computed and recorded approximately 166 latencies for each user. Subsequently, we computed the median, average, 95th percentile, and 99th percentile for each of the 100 users (results are available as CSV file here, which also includes random subject each user subscribed to, as well as the precise number of messages received by each user).

Finally, we calculated a 99% confidence interval and we can estimate that, should we repeat the test, there is a 99% probability that the average value – for all users – would be as follows:

We have customers with large deployments (millions of end users) where the Java Virtual Machine is configured such that no major JVM Garbage Collection occurs. However, in these cases MigratoryData server is restarted on a daily basis.

The benchmark test used standard configurations of Linux Kernel, Java Virtual Machine, and MigratoryData Server with only a few changes, which I am going to detail below.

MigratoryData Server ran on a machine with CentOS / RHEL 7.1 out of the box. In order to demonstrate that MigratoryData Server is able solve the C10M problem on commodity hardware and operating systems typically found in data centers, we did not recompile the kernel, but used the default 3.10.0-229 kernel.

The only system configurations we made are as follows:

We used Oracle Java 1.8 update 45. Here are the main Java Virtual Machine (JVM) parameters we used (all JVM parameters can be seen in the screenshot below): 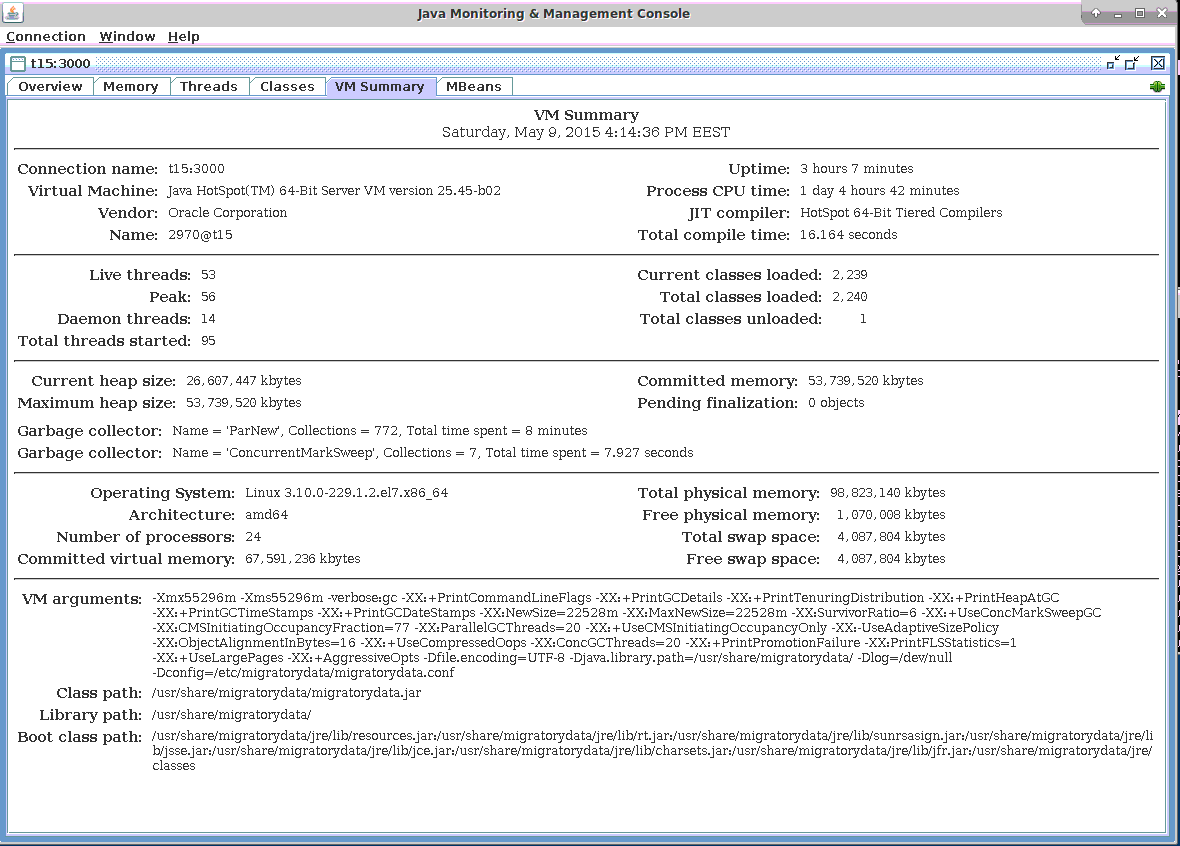 We used MigratoryData Server 5.0.14. To its default configuration, we made the following changes:

In a talk cited by HighScalability.com, Robert Graham discussed the C10M problem. He explains why the kernel could be more of a problem than a solution for achieving high scalability and suggested a number of principles for building scalable systems.

Looking at slabtop in the screenshot of the Network Utilization subsection above, we observe that the Linux kernel used around 32 GB to maintain open the 10 million concurrent socket connections. For usual systems, 3.2 KB per socket connection could seem quite reasonable. However with the explosion of Internet devices (mobiles and Internet of Things) we see systems requiring millions of concurrent connections more and more frequently. We therefore echo Robert’s concern on the kernel and think that Linux might, for example, provide better memory usage to handle socket connections.

Moreover, many of the principles discussed by Robert can be found in our approach presented above: do as much as possible outside the kernel, use an efficient thread model to scale across all processors, use huge pages to optimize CPU caches, and distribute interrupts across all processors.

That said, in this post we demonstrated that solving the C10M problem is feasible with MigratoryData Server using a commodity server and an off-the-shelf Linux distribution. Also, given the millions of end users that our customers have, who receive real-time data daily with MigratoryData Server running on Linux, the time for easily building highly scalable real-time Internet services is now, with existing ingredients: Linux operating system, MigratoryData’s real-time Web server, and MigratoryData’s API with libraries for almost any Internet technology (Web, Mobile, Desktop, Server, Internet of Things).

To learn more about MigratoryData Server and how it can help your business achieve effective high scalability, please visit migratorydata.com.