In our previous world-record-setting C10M benchmark, we showed that MigratoryData Server can achieve extreme high-scalability by delivering real-time messaging to 10 million concurrent users on a single 1U machine. Here, we show that MigratoryData Server can achieve simultaneously both extreme high-scalability and consistent low latency.

And so, the relatively high latency spikes we saw in the previous C10M benchmark were due to JVM's Garbage Collection (GC). In the new benchmark, not only Zing JVM didn't introduce high latency spikes, but based on analyzing the logs, it appears that GC effects no longer dominate latency behavior. The dramatically improved 126 ms max latency is not caused by GC but by other condition of the benchmark setup. Anyway, this max latency was so small for a web architecture that we did not spend time to determine at which level exactly it occurred.

In summary, this new C10M benchmark demonstrates that **MigratoryData Server **running on a single 1U machine can handle 10 million concurrent clients each receiving a 512-byte message per minute (at a total bandwidth of 0.8 Gbps) with a consistent end-to-end latency of under 15 milliseconds.

We used the same benchmark setup and config from the previous C10M benchmark (see sections “Benchmark Setup” and “Configuration Tuning”). The only changes were to replace the JVM with Zing JVM and not use huge pages.

To briefly describe the benchmark setup (full details, including the specifications of the machines, can be found in our previous C10M benchmark), nine machines were utilized as follows:

MigratoryData Server provides advanced monitoring via JMX and other protocols. We used the jconsole tool (part of the Java Development Kit) for JMX monitoring. In the results presented below we show screenshots obtained during JMX monitoring. 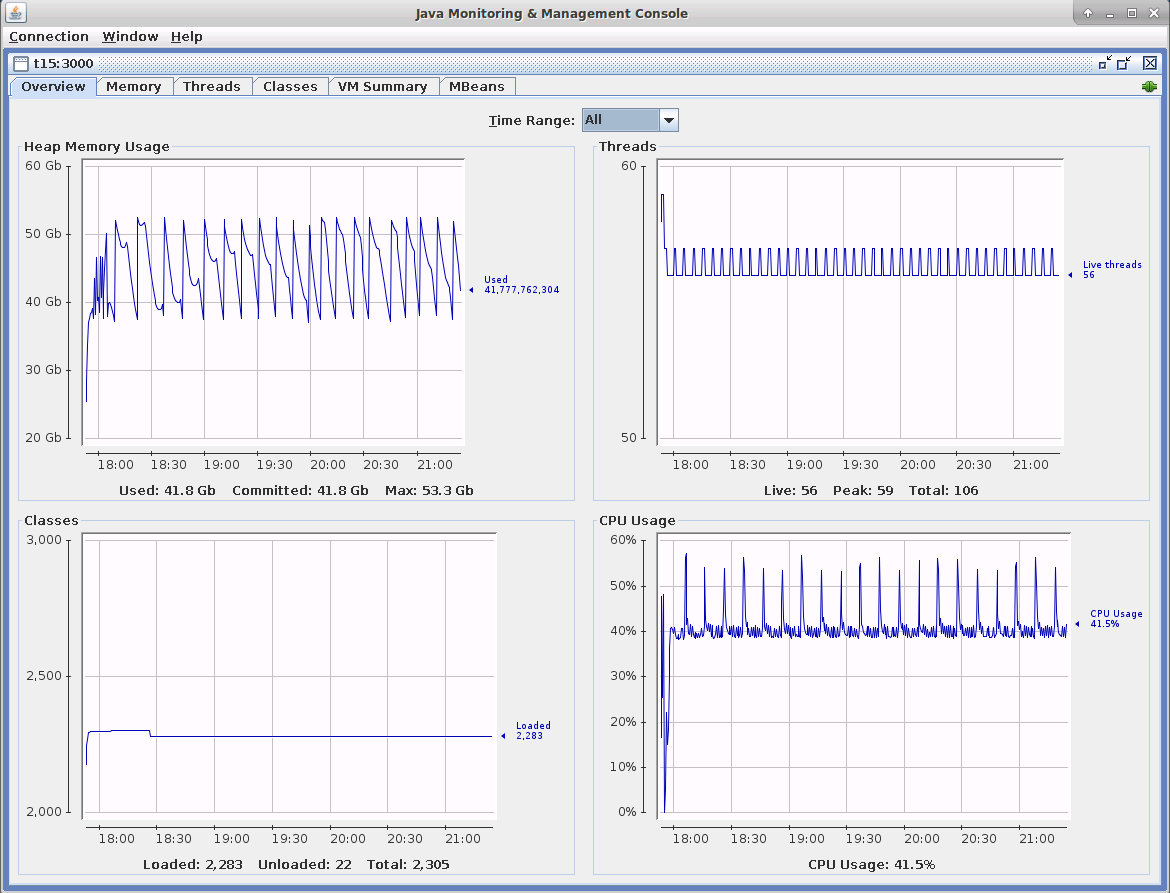 As you can see in the screenshot below, sending a 512-byte message to each of 10 million clients every minute produced a total outgoing bandwidth from server to subscribers of 103 MB/s or 0.8 Gbps. This total bandwidth includes the 512-byte payload of each of the 168,000 messages sent every second to the subscribers, the overhead added by the TCP and MigratoryData protocol for each message, as well as certain traffic produced by the ssh sessions, JMX monitoring, and the TCP acknowledgements sent by the MigratoryData server to publishers for the received messages. Therefore, the overhead introduced by the TCP and MigratoryData protocol was under 131 bytes per message.

This screenshot also shows the top and slabtop information, and the number of sockets as reported by the netstat tool. 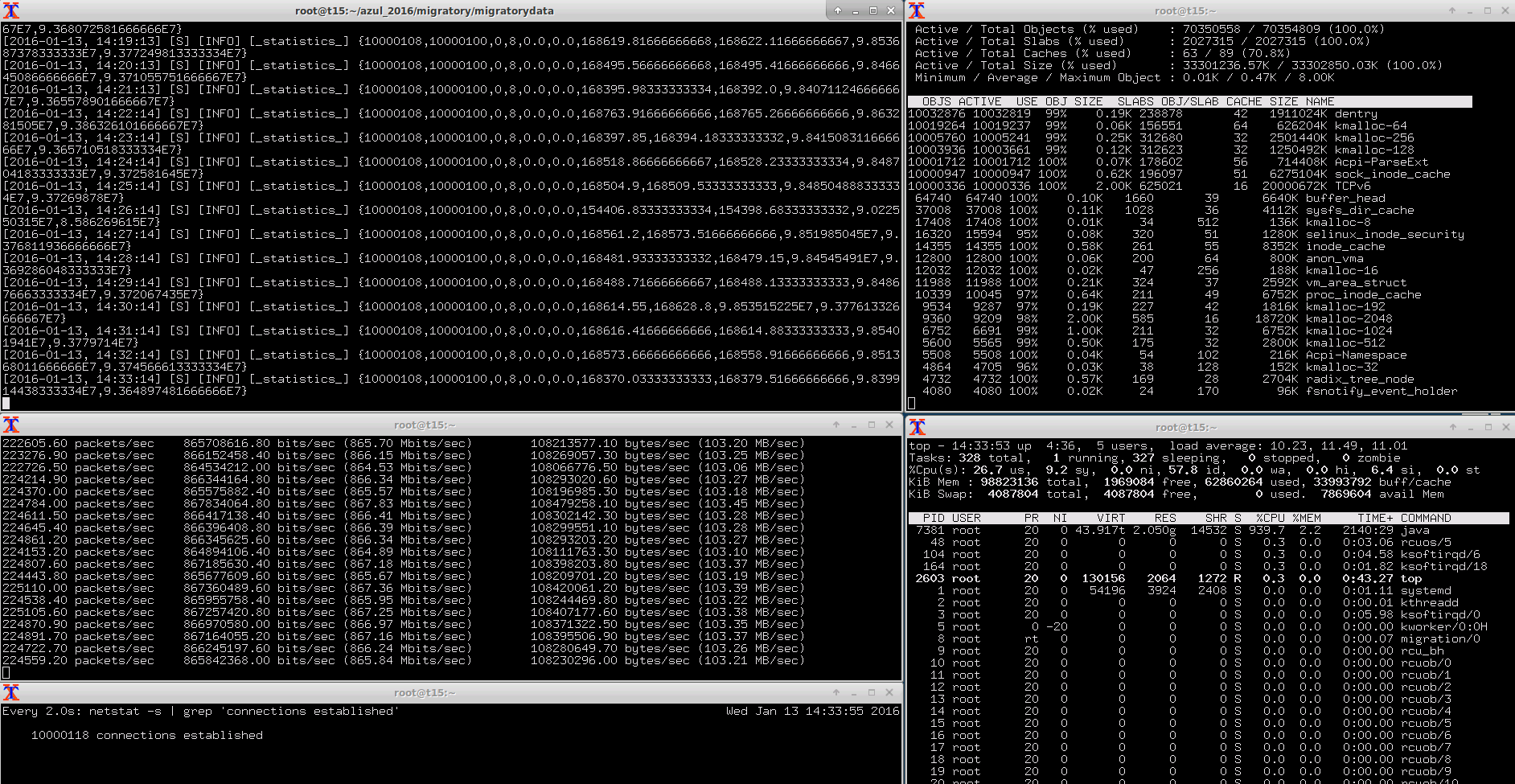 As defined in the Benchmark Setup section above, latency is the time needed for a message to propagate from the publisher to the subscriber, via the MigratoryData server. When Benchpub creates a message it includes the creation time as part of it. In this way, Benchsub can compute the latency as the difference between the creation and reception times of the messages. Because the machines were synchronized with ntp, which did not run long enough for perfect time synchronization, we can observe 1-2 milliseconds time differences between publisher machines and subscribers machines (see the negative values of “Latency Min” in the screenshot).

In the screenshot below, the “Total messages” information shows that each of the four Benchsub instances received around 450 millions messages during more than 3 hours of benchmark test running. Hence, the following latency statistics are accurate, being computed on the entire population of about 1.8 billion messages (up to the ntp time difference of 1-2 milliseconds): 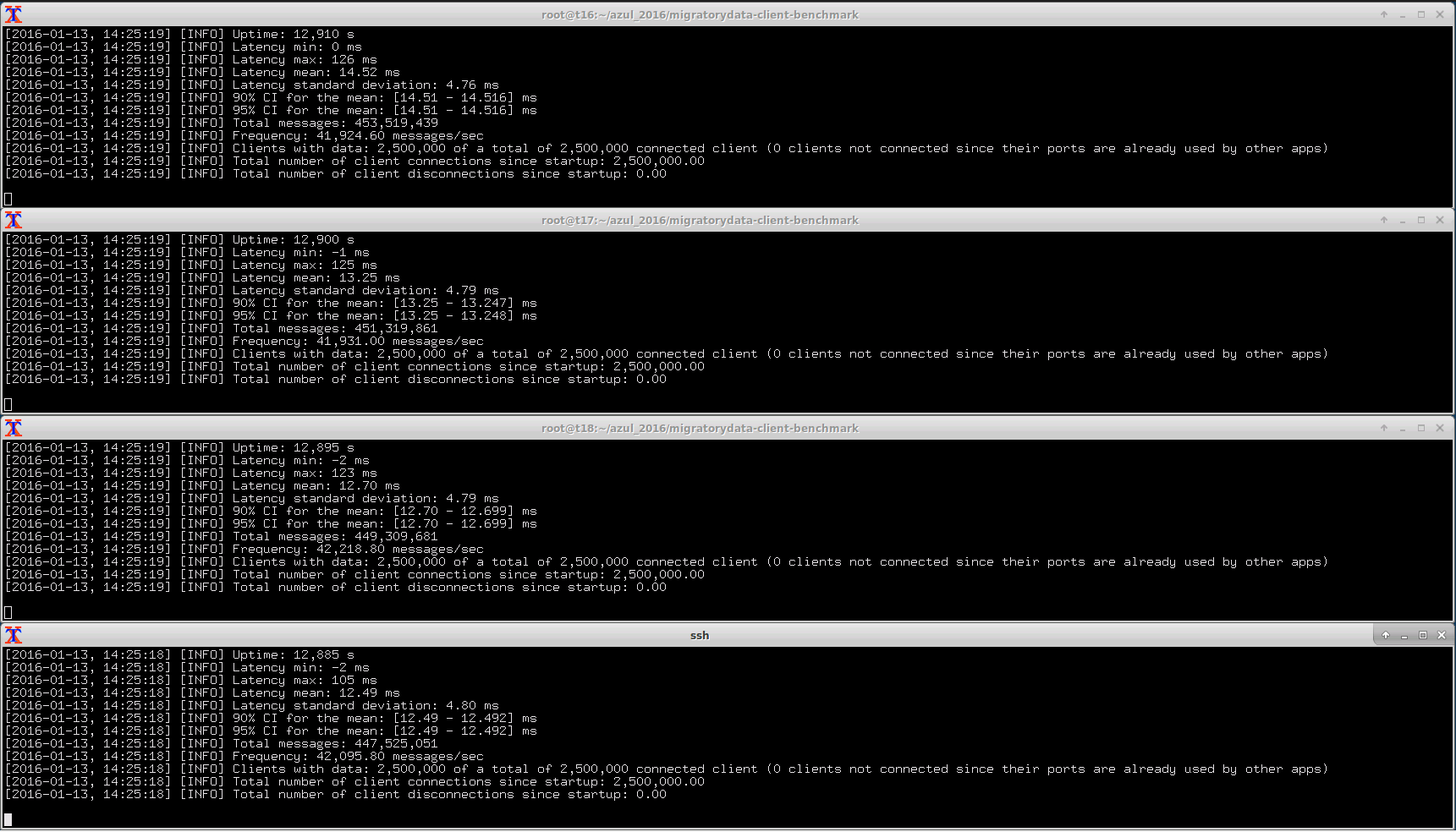 In the previous section we explained that the latency statistics – mean, standard deviation, and maximum – were computed for all messages received by all 10 million clients. However, other stats that would be interesting to look at for a real-time service, including the median, the 95th percentile and the 99th percentile, cannot be computed incrementally. We need all latency values in order to be able to compute such extra statistics. Recording 1.8 billion latency values is not practical during a performance test, so we used sampling to estimate these additional statistics.

As mentioned in the Benchmark Setup section, we used a fifth Benchsub instance to collect samples for 100 concurrent users from the entire population of 10 million. Each of the 100 users subscribed to a randomly selected subject from the 10 million subjects available.

We recorded all latency values for each of the 100 users for more than 3 hours during the benchmark test. Since each user received an average of one message per minute, we computed and recorded approximately 200 latency values for each user. Subsequently, we computed the median, average, 95th percentile, and 99th percentile for each of the 100 users (detailed results are available here).

Finally, we calculated a 99% confidence interval and we can estimate that, should we repeat the test, there is a 99% probability that the average value would be as follows:

We showed here that MigratoryData Server can achieve simultaneously both extreme high-scalability and consistent low latency - delivering real-time data to 10 million concurrent users with under 15 ms average latency, under 25 ms 99th percentile latency, and 126 ms maximum latency for the worst case (computed from a total of 1.8 billion latency values!) - provided that a properly tuned JVM for short garbage collection pauses is used, such as Zing JVM.