This guide provides an overview of the MigratoryData server and explains its concepts and features.

A technique named HTTP polling is often used to provide users with up-to-date content without the need for the manual refresh of Step 3 above, thus achieving a form of web messaging. The polling technique consists of including some JavaScript code in the web page which is executed by the web browser in background as long as the web page is displayed by the browser. The script periodically sends HTTP requests to the web server to check whether or not there are changes in the content of the web page. If there are no changes, the script will do nothing, otherwise it will display the new content.

While the HTTP polling technique can be used to achieve a rudimentary form of web messaging for certain applications, this technique becomes highly inefficient for many other web applications, especially for those with a high number of users and expecting low data latency, near to the real-time.

Indeed, even if the polling script is configured to poll the web server as frequently as a web server can handle, the latency of data - i.e. the time required to propagate the data from the server side to the user

Also, given that the web servers have substantial limitations in handling a high number of concurrent users which perform a high number of HTTP requests per second, a real-time web application with a large number of users, say of the order of millions, would need a lot of web servers to achieve web messaging through HTTP polling. Moreover, each HTTP request sent by the polling script, just to check whether there is or not any fresh data on the server, includes hundreds of bytes, which are automatically added by the browser to each request as the HTTP headers. This redundant overhead sent by many users at a high polling frequency produces an important bandwidth consumption. The need for many server machines for the web server and the high network utilization due to the overhead of the HTTP headers significantly increase the total cost of ownership for the applications with many concurrent users when using the HTTP polling technique to deliver real-time data.

The MigratoryData server delivers data according to a publish/subscribe model as follows:

MigratoryData Server was designed to scale to a huge number of concurrent users. MigratoryData set a new standard in scalability when , which is the ability to handle 10 million concurrent users on a single 1U server (with substantial messaging traffic, of the order of 1 Gbps).

The solution MigratoryData proposes not only is a very scalable messaging solution for adding real-time functionalities to web applications, it also achieves high scalability without sacrificing reliability as detailed in the paper (the final version of this paper is available in the proceedings of the 18th ACM/IFIP/USENIX Middleware International Conference from ).

Last but not least, MigratoryData is a mature and proven web messaging solution, being used since over a decade to successfully deliver real-time data to millions of users every day.

This section provides a brief introduction to the MigratoryData solution which consists of:

The key features of the MigratoryData server are described below.

The MigratoryData server running on a single 1U server can handle (with substantial outgoing messaging traffic, of the order of 1 Gbps). Thus achieving 1000x more scalability than the well-known which has been for a long time a scalability challenge in the realm of web servers. Besides its unparalleled vertical scalability, MigratoryData scales horizontally through built-in clustering to cost-efficiently handle any number of users.

Multiple instances of the MigratoryData server can be deployed as a fault-tolerant active/active cluster with no single point of failure. Please refer to the clustering section below for more details.

MigratoryData clustering can be configured to achieve guaranteed message delivery and message ordering even in the event of unexpected events such as hardware failures or network disconnections. Please refer to the Guaranteed Message Delivery section below for more details.

As detailed in introduction, MigratoryData implements the publish/subscribe model using a compact message protocol over WebSockets. Thus achieving up to several orders of magnitude bandwidth improvement comparing to the traditional HTTP polling approach.

MigratoryData is designed to scale up the entire capacity of the allocated resources, including the network. For example, MigratoryData deployed on a single 1U server can on the 10 Gigabit Ethernet, consisting of almost 2 million messages per second.

Fresh data available on the server is delivered to users in milliseconds. For example, MigratoryData running on a single 1U server can achieve almost 1 Gbps messaging to 10 million concurrent clients with a .

Encrypted and password-protected monitoring is made available though the industry standards JMX and HTTP which can be integrated with most enterprise management systems. See the monitoring section below for more details.

MigratoryData currently provides integrations with Elastic for , as well as with Firebase for .

MigratoryData offers a common client API with libraries for various languages and technologies as listed below.

Several extension APIs for building plugins for the MigratoryData server are available.

This chapter describes the core concepts of the MigratoryData server:

A MigratoryData message consists of several pieces of information as follows:

For example, the following character string, composed by the segments Stocks, NYSE, and IBM, is a valid subject for the MigratoryData server /Stocks/NYSE/IBM.

Here are some examples of invalid subjects:

The following tables shows the snapshot message of the subject [/Stocks/NYSE/IBM]{.title-ref} as new messages are received by the MigratoryData server.

Batching is the process of collecting several messages together for a period of time or until a total size is reached before sending them in a single I/O operation to a client.

Depending on your use case, especially if subjects are systematically updated at a high frequency (multiple messages per second), then batching can optimize the network I/O.

The following diagram shows the circulation of messages without batching. 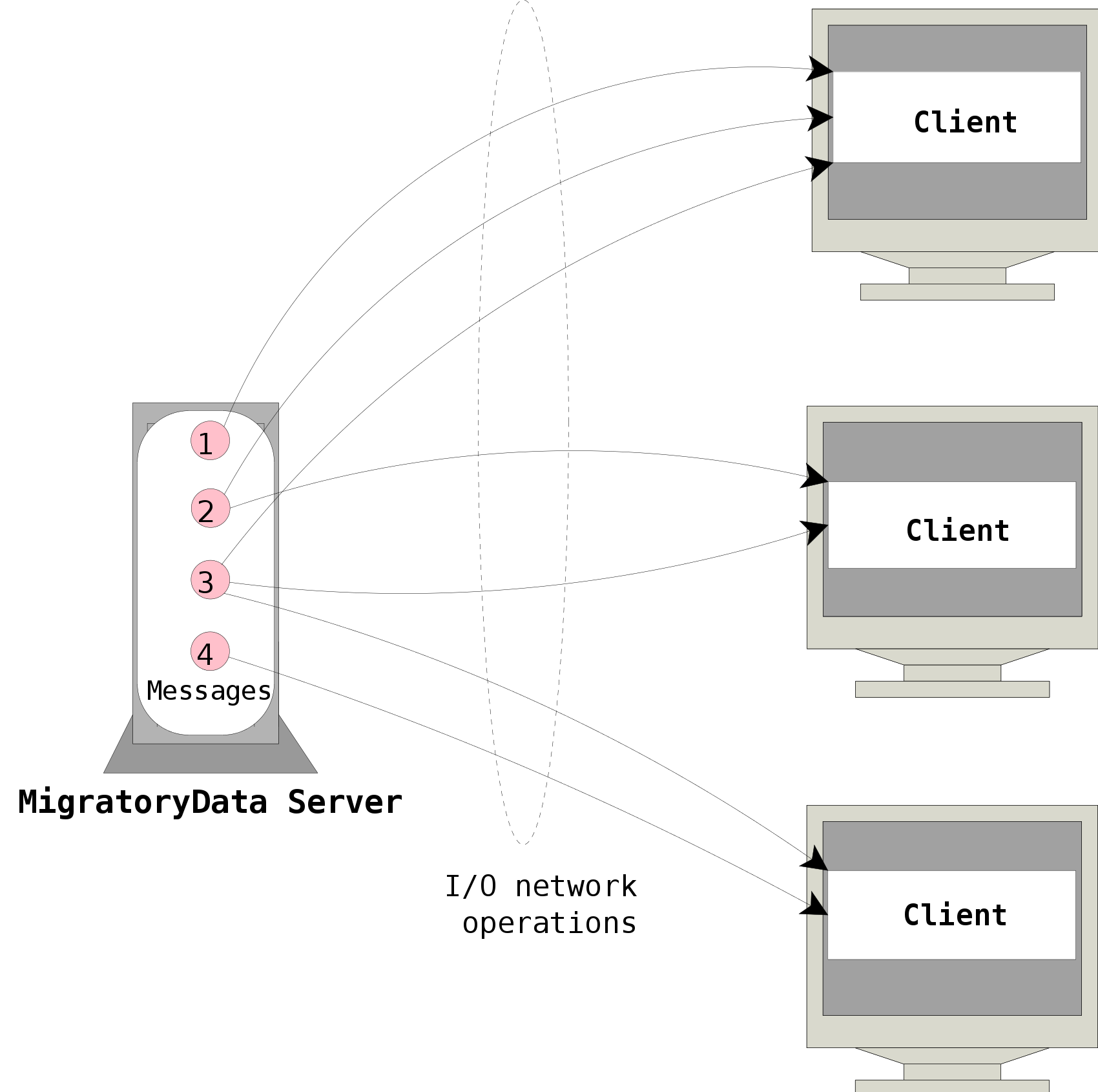 The following diagram shows the circulation of messages with batching enabled. 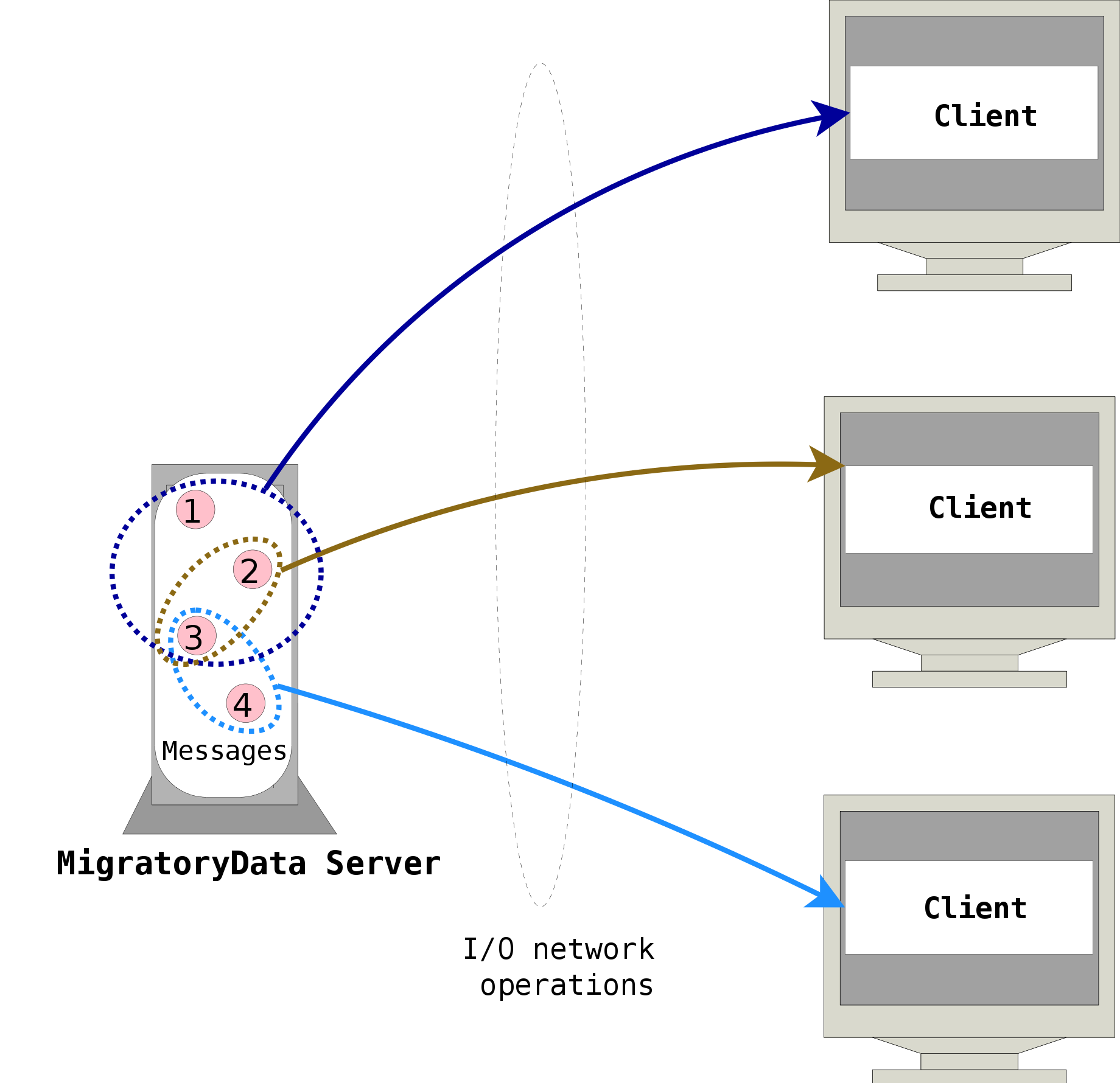 The UTF-8 character encoding is used for all components of MigratoryData messages including for the message content and message subject. Thus, MigratoryData Server is able to handle messages with any international character set including ASCII.

The Publish-Subscribe Model is defined as follows. A client connects to a MigratoryData server and subscribes to a subject X. Depending whether the subject X is already subscribed by other clients or not, one of the following two situations will happen:

When the client is not interested anymore by the messages with the subject X, it can unsubscribe from the subject X. 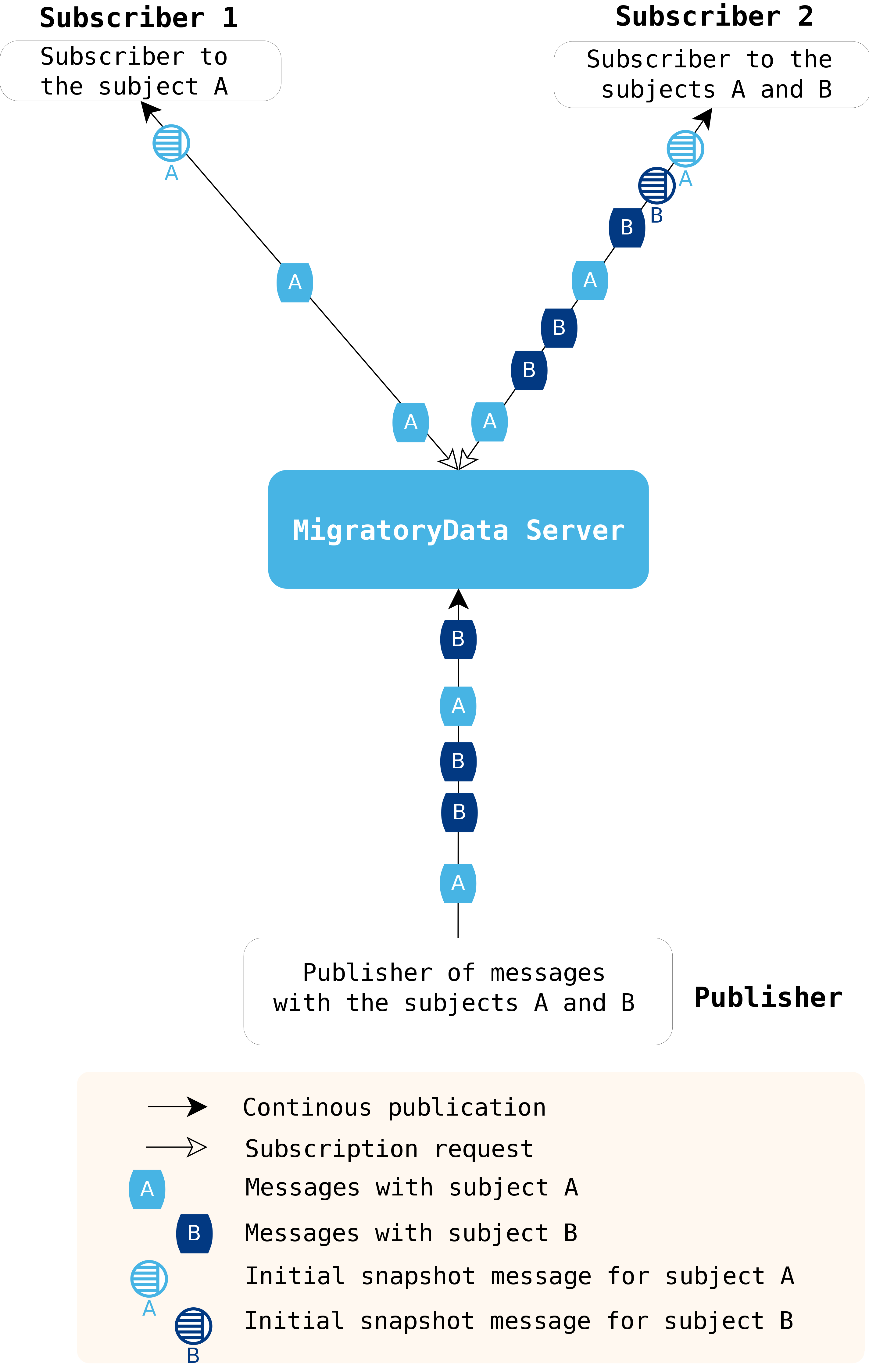 This section provides more details about some features of the MigratoryData server.

The security of the MigratoryData server is assured by:

For production deployment, the recommendation is to configure the MigratoryData server to use encrypted connections. In this way, your data will be securely delivered. Encrypted connections might also help to avoid the interference with certain security solutions.

The following diagram shows how both subscribers and publishers securely connect to a single open port of the MigratoryData server. 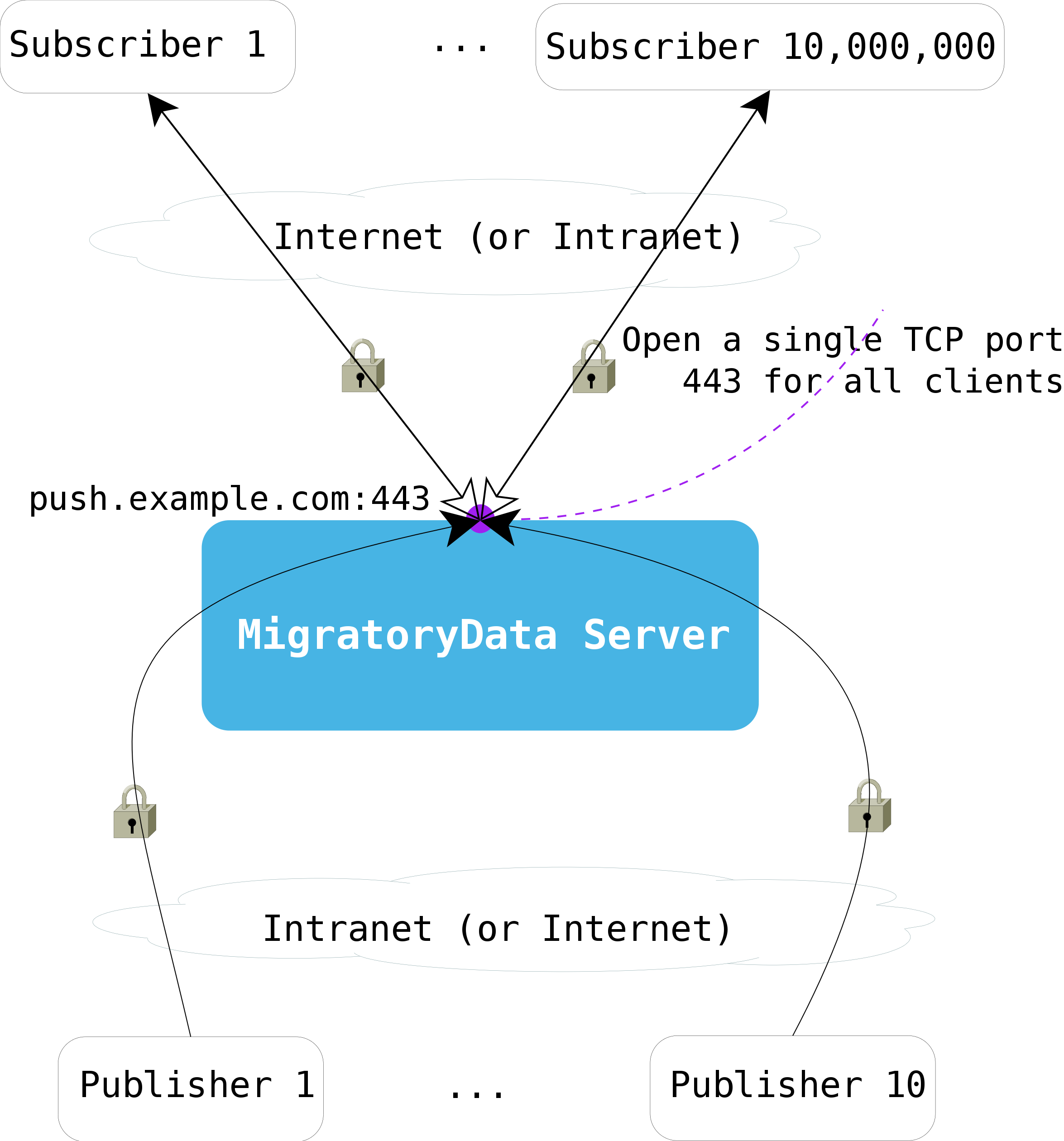 While it’s perfectly valid and beneficial to use a single network address and a single port to accept all clients, there are setups when the MigratoryData server is deployed in the DMZ and the publisher clients are deployed behind the second firewall of the DMZ to integrate with the backend servers. In this setup, the publishers typically are not allowed to access Internet addresses, thus they will not be allowed to connect to push.example.com:443. For such a setup, a secondary LAN address, say 192.168.1.1, should be configured on the machine hosting the MigratoryData server. For this local address, you can configure any port available to accept connections from publishers, provided however that the port is allowed by the firewall. As in the case of the client port, you can configure the publisher port to accept either normal or encrypted connections.

The following diagram shows the ports used by the MigratoryData server to communicate with its clients and publishers. 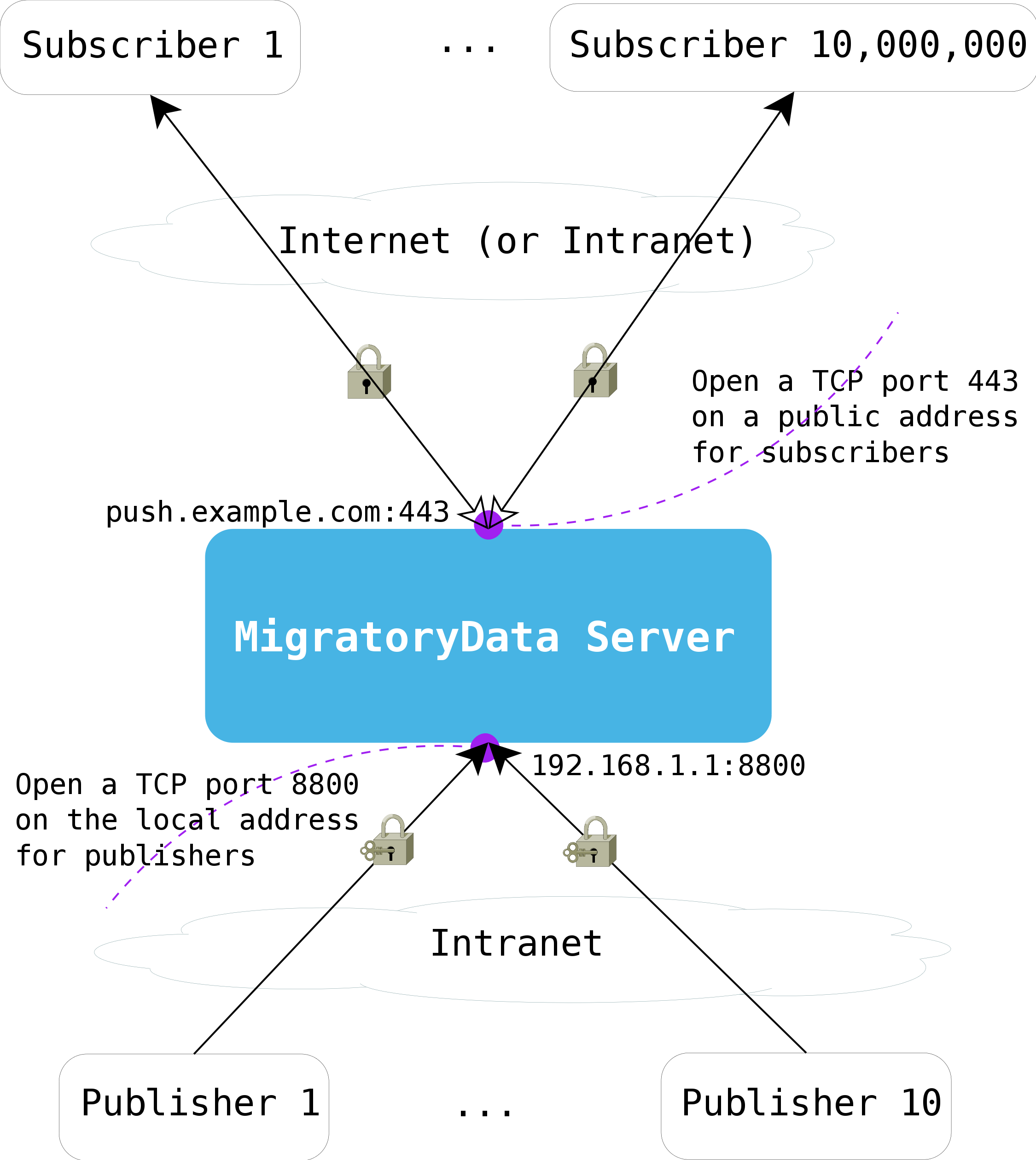 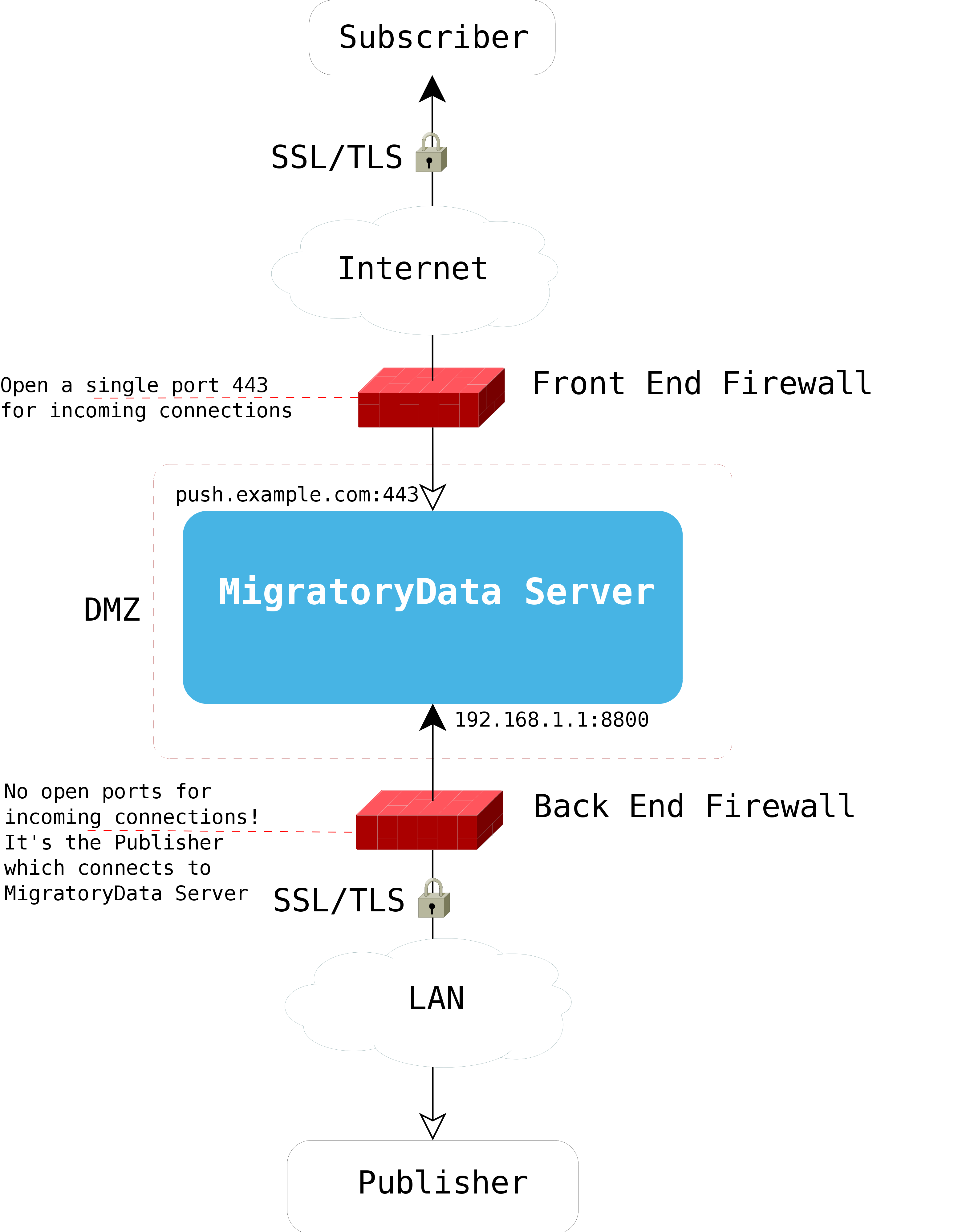 The entitlement should be enabled as follows:

The indicators which can be monitored are:

The following statistics are computed for the parameters above:

At each moment, the values of the statistics above are available for the following periods of time:

You can deploy multiple instances of MigratoryData Server as an active/active cluster to achieve:

Therefore, the MigratoryData solution does not require specialized appliances or sophisticated application delivery network services to achieve load balancing and fault tolerance, all these are built-in.

There are two clustering modes offering different qualities of service for message delivery:

All entities which communicate with the MigratoryData server use the TCP protocol at the transport layer, which is a reliable protocol. Also, with any of the two clustering modes, the client will automatically reconnect to the cluster and will continue to function even if a sudden failure occurs. This self-healing feature and the use of the reliable TCP protocol offer reliable message delivery for both clustering modes. However, Guaranteed Message Delivery offers something more as follows:

The following diagram shows an example of fail-over recovery with Standard Message Delivery enabled. Note that when the client reconnects to the server B at 10:12:20, it will only get the snapshot message available for the subject X at that time (which is the latest message for the subject X with the flag retained on true). Therefore, it will not get one of the two messages which occurred during the fail-over recovery period, i.e. the message at 10:12:05.

The following diagram shows an example of fail-over recovery with Guaranteed Message Delivery enabled. Note that when the client reconnects to the server B at 10:12:20, it will get not only the snapshot message available for the subject X at that time, but all messages received during the fail-over recovery period, including the message at 10:12:05. 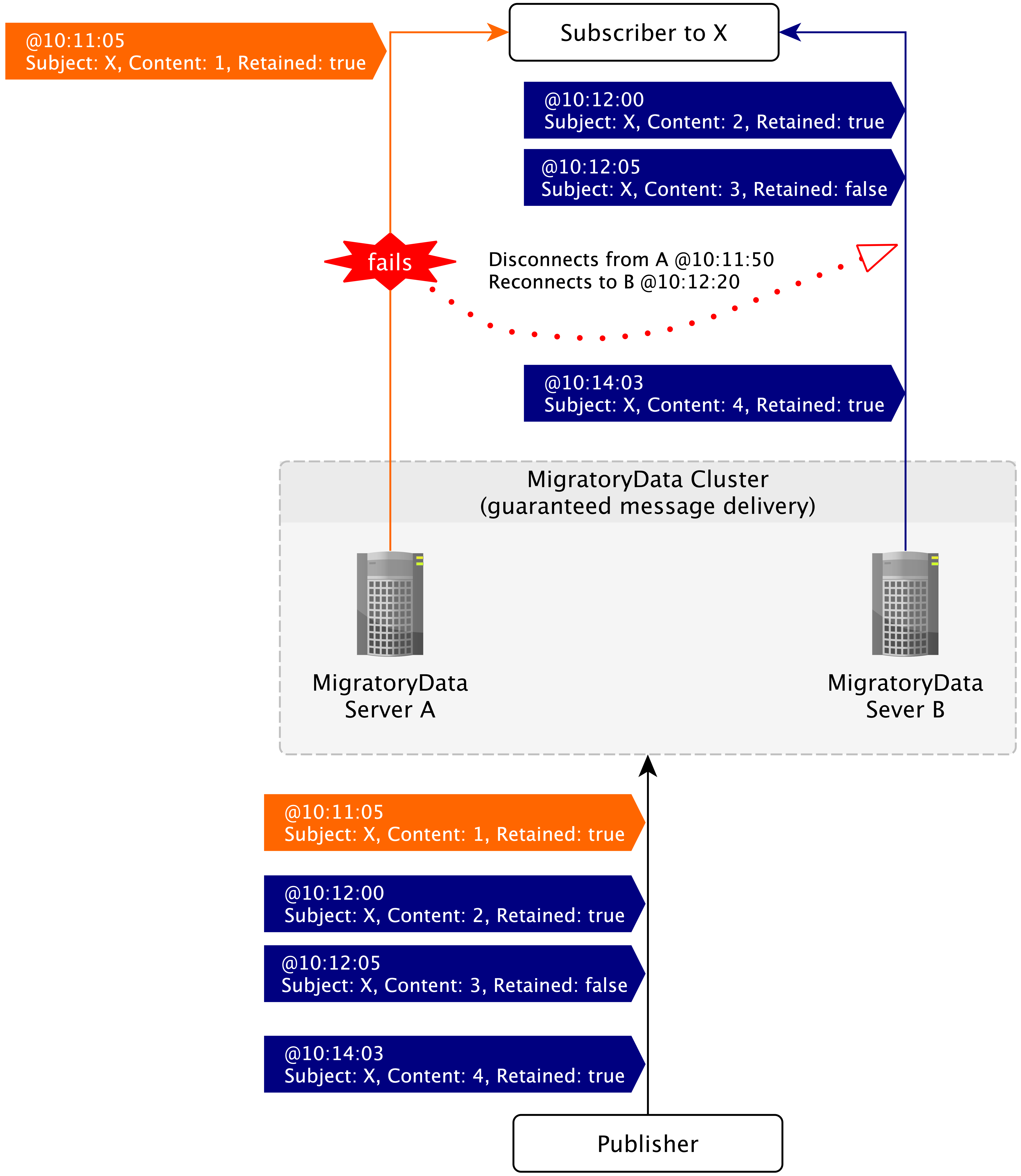 So, the cluster can be scaled up and down according the load of the system. This can be done either manually or by using a feature like [autoscaling]{.title-ref} made available by the automatic deployment systems like Kubernetes.

That being said, there are specific requirements related to the cluster members to be started initially depending on the clustering mode used as detailed below.

For clustering using Standard Message Delivery, the minimum number of cluster members to be started initially is one. Moreover, this member can be any member of the ordered list of members defining the cluster.

A cluster using Standard Message Delivery can tolerate `N` members down in a cluster with `N + 1` members.

For example, a cluster with 12 members will have by default 5 seed members. So, the first 5 cluster members should be initially started as the minimum number of members. Then, the nodes from six to twelve can be added to the cluster or removed from the cluster anytime according to the load of the cluster. The parameter ClusterSeedMemberCount can be used to decrease the number of seed member to 3, and therefore allowing to start with a smaller number of initial members.

In the example above, the cluster of 12 members with the default number of 5 seed members can tolerate 9 members down: 2 seed members and 7 non-seed members.

If the number of seed members is reduced to 3 with the parameter ClusterSeedMemberCount, then the cluster of 12 members can tolerate 10 members down: 1 seed member and 9 non-seed members.

The paper explains the internals of the MigratoryData server and how concepts like replication, in-memory distributed caching, coordinators, subscribers partitioning, subject groups, sequence numbers, epoch numbers, two-layer architecture: I/O and workers, message ordering are used to achieve high vertical scalability, horizontal scalability, clustering, and guaranteed message delivery at scale. The final version of this paper is available in the proceedings of the 18th ACM/IFIP/USENIX Middleware International Conference from .